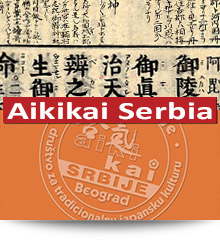 Home / Topics / Esseys / The Spirit of Zen In Aikido

The Spirit of Zen In Aikido

Those who know do not speak;
Those who speak do not know”

In the world where the “instant” experience has become the everyday life, and the search for true values a real quest for the holy grail, and in which the success is measured by the state on the bank account, we are getting further and further away from the possibility of knowing our true nature and the thing that the Zen masters considered the greatest spiritual achievement, enlightenment[1], reaching the state in which all the differences are cancelled and limitations overcome.

“To the contrary, the measurement of values and success in terms of time, and the constant request for the promising future, prevent us from leading a free life in the present and in the ‘promising’ future, when it comes. Nothing exists but the present, and if a man cannot live in it, he cannot live anywhere.”[2]

In these terms, the achievement is also tailored by the “usurer’s hat”, for it is not uncommon these days that the success and social recognition do not come as the result of long-term “fasting and hardships”, and the hard work and emphasized desire for self-improvement is considered a waste of time unless it contributes to the increase of capital. And Faust’s deal with the devil whom he sold his soul in exchange for knowledge has been long forgotten…

Maybe it is exactly the reason why, as it happened so many times before in the course of history, that in the environment of dominant mediocrity and existential insecurity the people return to the bases of their religion, as the ground-stone which will give such needed sense of direction to the senseless reality of their lives. And it is certainly one of the reasons why Zen Buddhism has become increasingly popular in the latest years, with its principles so close to the average man. Is there anything more simple than the spontaneity which Zen emphasizes? Be who you are and know yourself and the world around you through your everyday activities. But the very conciseness of this principle conceals the deepest meaning and the hardest task. As the Latin proverb reads: “Brave is the one who conquers himself”. In Zen Buddhism, these people are called the enlightened ones.

“Still, the experience of enlightenment must be attained through personal effort. The teacher can point to the path, but the ultimate jump must be made by the student. The enlightenment is awakening or awareness in itself and does not depend on anyone else. It enables the man to view the world in the eternal harmony and beauty since it is actually represents the return to the Source or going back home. It is the first step towards the complete freedom…Once we know our own nature, we can understand the way of things and accept them the way they are.”[3]

However, there is nothing harder than knowing yourself, as the ancient philosophers were first to realize. It is a long and strenuous journey whose sense lies in the quest itself, which is both the aim and the reward.

Nevertheless, since my objective is not to write the metaphysical tractate about the sense of life, I will try to shed some light on the role and effect of Zen in the contemporary world and concretely in aikido, which represents its purest manifestation among all the other martial arts.

As Zen teaches us that there is only one path leading from ourselves back to us, so all the modern martial arts are directed towards “finding path”, i.e. the way of self-improvement through the unity of spiritual and physical, with equal respect of both principles. For the power of Zen lies in the harmony, in the continuous rotation and repetition of daily, monthly, annual and planetary cycles and the aspiration of people to coordinate their rhythm with the breathing of the universe surrounding them. It is just like in the kokyu exercise at the beginning and end of training: when we inhale, we are drawing the entire universe into ourselves and in this way become its inseparable part.

All Aikido techniques are pervaded with the same idea: their execution must be natural and harmonious as the breathing which accompanies them, and each movement the reflection of inner peace and balance which is also transferred into the relations with other people. In time when bujutsu[4] and the samurai code were the main promoters of the spirit and philosophy of Zen Buddhism, the word calmness implied that one made peace with one’s own mortality and also the readiness to lay down one’s life in battle with no remorse. However, with the gradual weakening of the martial aspect and the transition of words “jutsu” from the compounds like “bujutsu”, “aikijutsu” etc. into “do” (path, way, means), the meaning of the closely linked terms altered as well. Thus the synonym of calmness and determination at the face of death turned into concentration on the accurate execution of the given technique at trainings, but in such a way as though the person doing it is really in a life danger. Of course, due to the prevailing atmosphere of mutual respect and trust, as well as the spirit of partnership at trainings, it is very hard to imagine that your partner will attack you with the intention of seriously hurting you, or even less likely, killing you. However, the Aikido teachers keep emphasizing to their students that they must always be prepared to react instantly, and that, like at the battle field centuries ago, even a momentary hesitation can decide the winner in the battle, i.e. make the technique unsuccessful and inefficient.

This is why we must have “the Zen of each moment” like in the famous story[5], which means that we must be in accordance with ourselves and our abilities, which also implies knowing our own limitations. That is the reason why the purity and demanding nature of Zen and Aikido principles exclude vanity, arrogance and desire for power. Social status, material goods, personal success, all become meaningless in Zen. All is one and one is all, so there is no room for differences. The physical power makes just one part of the person who is practicing, and it is not enough to lure the person in the false sense of security or impose the thought of one’s superiority. Once he realizes that, the man is on the right way towards self-awareness and self-realization, as well as to the seemingly unachievable ideal of Morihei Ueshiba of unity and harmony with the Universe.

Dedicated to all true seekers for the holy grail!

[1] Japanese: Satori, Note of the Author