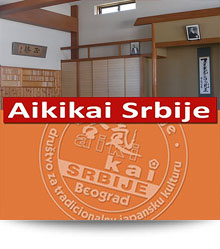 At a recent Myo Slihi Juku Instructors' Course, Mr Brady (UKA Shidoin) asked those present to share with the class their understanding of ukemi: both what it is and why we do it. This, coupled with my recent reading of Saotome Sensei's book "Aikido and the Harmony of Nature', has prompted me to put my thoughts on paper. Hence, what you are about to read.

As I currently see it, there are 5 reasons for taking or receiving ukemi. These are, in order of natural progression:

Before I go in to these reasons in some detail, I would like the reader to consider the following two points and to bear them in mind as you read on:

Do not think of ukemi as just a breakfall. It is a much bigger thing than this: it is a description of your response to either nage-waza (throwing technique) or to osaewasa (pinning technique). The breakfall (in the case of nage-waza) is just the end part of the process that stops you falling and injuring yourself.

I am quoting Chiba Sensci here. Conditioning our bodies, both as tori and uke, is vital if we are to be able to apply (and in the dojo to receive) the 1% martial art. Do not always expect that the martial application to be physically obvious. However, mentally, it should be ever present.

At, perhaps, the most basic level, we learn how to "role'. Why'? Nobody in the street would! We learn how to roll so that we can receive nagewaza. This allows our Partner to practise nagewaza with ever increasing commitment and energy. Only by doing this can tori develop her / his technique. it should be the case that there is a certain exhilaration in feeling the power of tori's technique, knowing that we have survived it without injury and are able to attack again.

From a safety point of view, Aikido is one of the few arts where you can practice in the dojo as you would need to in the street because of the teaching of ukemi. (It should also be noted that certain techniques, for example, irimi-nage, are able to be practised in a soft and flowing manner but can, with very little adaptation become a very practical "street technique").

What about osaewaza? This is not so clear cut as there is no roll at the end of such a technique. This is where an understanding of ukemi as "receiving body" as opposed to a breakfall is important. When uke attacks, whether by a grab or a strike, they should do so with a feeling of attacking from their centre: not just holding tightly or hitting hard with the hand or arm, Likewise, tori's intention is to control uke by controlling their (uke's) centre, not just by controlling the attacking hand. As tori breaks uke's balance (kuzushi) and starts to apply a technique (in itself a “counter” attack) uke's response is to expand towards the centre of the movement, thereby harmonising with it. There is a constant interplay and exchange of who is "yin" and who is 'yang". Let me give an example: in receiving nikyo ura, uke's instinct may be to contract, to escape from tori, and, in so doing from the centre of the movement. If the technique is applied correctly, the only way to escape injury is to go towards tori. It is interesting to note that it is in the exact opposite of what our untrained instinct tells to do that we save ourselves.

As a junior grade you may wonder why more senior students are so keen to take ukemi from a visiting Shihan. Why would anyone be so stupid? It looks pretty rough out there!! I would suggest that to experience technique first hand is an entirely different matter to watching it. Of course there are things that you see when you watch that you miss when upside down hoping that you'll land before reaching the wall, but it is no match for feeling the power and gaining a physical insight into where the power comes from.

As an instructor, it is sometimes only in feeling a student's technique that you can truly know if she / he has an understanding of the technique. It is possible for a movement to appear to be correct whilst in fact missing an essential element. This error is rarely made whilst physically experiencing the technique. It is my belief that the reason that some men get to Dan grade without having an understanding of technique, is that they have enough physical strength to "intake it work" (or at least appear to work) and their instructor has never (or rarely) taken ukemi from them to know any different.. Finally, we come to the issue of kaeshiwaza. if a technique is perfect it is not possible to counter it. However, most of the time our techniques are not perfect and there are opportunities to counter them. In the right setting, this should be welcomed by tori as providing a learning vehicle to develop and polish their own technique. O’ Sensei taught kaeshi-waza to his uchi deshi (inner disciple) so that they would always have something extra up their sleeve and would not be caught out!

I do not think that the concept of kaeshiwaza is helpfull to beginners as it immediately makes them think of ways to counter which in turn makes them to contract instead of expand. This is exactly the opposite of what is desired. Openings for kaeshiwaza are only successfully exploited by taking good, responsive ukemi. it is not about spoiling technique but, in a sense, being such an integral part of the technique that the uke is able to respond to the opening and to "turn the tables".

Does the uke attack with the expectation that she / he will end up defeated? No! In a martial sense, therefore, by taking correct ukemi, we constantly allow ourselves the opportunity, to regain our original position, i.e. that of aggressor and intended victor.